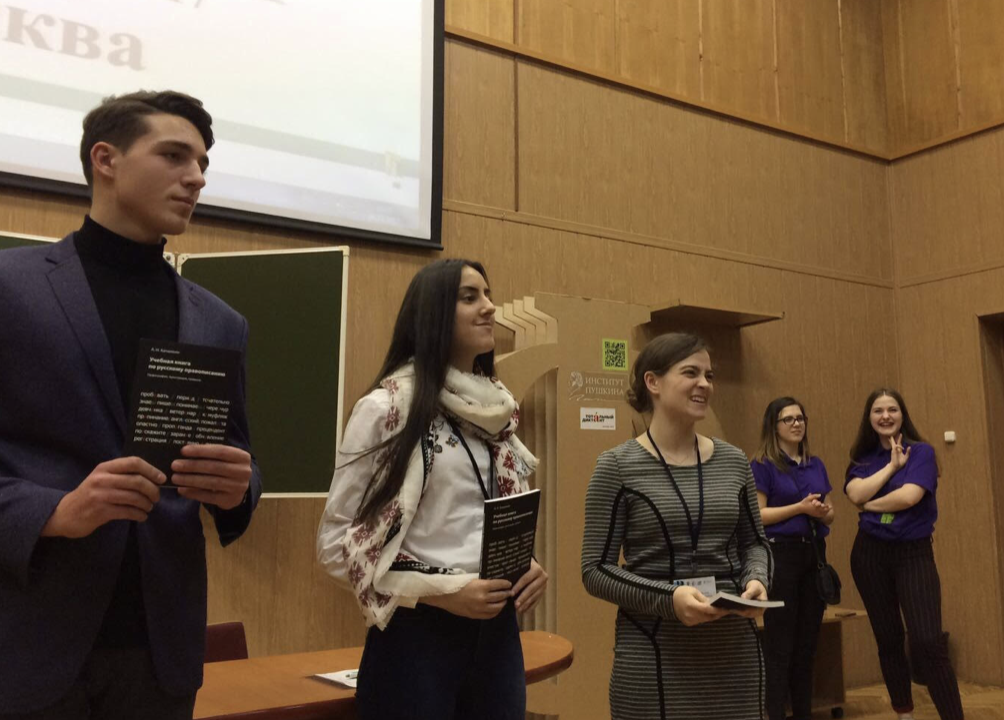 A Mississippi School for Mathematics and Science student is a winner in an international competition among high school students of Russian.

Sydney Matrisciano, 17, captured a Young Orator prize certificate at the International Olympiada of Spoken Russian in Moscow earlier this month. In her winning speech, Matrisciano described her experiences studying Russian abroad in summer 2017 and her love for the Russian language and also gave a dramatic recitation of a poem by the Russian Romantic era author Alexander Pushkin.

“I never, ever expected to win,” said Matrisciano, adding that she began her three-minute speech slowly to combat nerves and gain confidence.  She said that as she neared the end, reciting the poem “I Loved You,” many in the audience of judges, teachers, fellow competitors and other observers were saying the beloved verses along with her and taking video. “After the event finished, loads of people were coming up and congratulating me or asking questions,” she recalled.

The daughter of Suzanne and Louis Matrisciano of Winona, the MSMS senior was one of 12 winners in the Young Orator event, just one element of the competition, held December 4-8 at the Pushkin Institute, which specializes in the teaching of Russian as a foreign language. In other parts of the competition, held annually to promote the study of Russian language and culture abroad, the 150 contenders from around the world wrote essays, took grammar tests, and made oral presentations on aspects of Russian civilization. The contestants demonstrated their conversational abilities in role-play with a partner as the judges listened. Each competitor also had an individual scenario-based conversation with the judges. “My scenario was that I wanted a dog, but my mother didn’t think I had time for it,” Matrisciano said. “I had to convince her that I could and would make time in my schedule, as well as describe what kind of dog I wanted.”

A second-year student of MSMS world language teacher Margaret Mary Henry, Matrisciano was one of six students representing the U.S. at the Olympiada. The path to Moscow began last April, when Matrisciano won a gold medal in the regional Olympiada competition at Rhodes College in Memphis. From the top scorers in regional competitions, the American Councils for International Education selected the national team through an application and interview process.

“Sydney is a marvelous student,” Henry said. “She combines her natural gift for languages with a prodigious work ethic and a spirit of adventure. We are tremendously proud of her.”

Last summer Matrisciano spent six weeks studying Russian in Moldova, a nation that was once a Soviet republic, after winning a scholarship under the National Security Language Initiative for Youth, which sends high school students abroad to study languages that the federal government deems critical to U.S. political and economic interests.

On the day she left for the Moscow Olympiada, Matrisciano, who hopes to have a career in the U.S. Foreign Service, learned that she had received a full four-year QuestBridge scholarship to Northwestern University in Evanston, IL, where she plans to specialize in Russian studies and political science.

“Attending the International Olympiada of Spoken Russian was confirmation and validation of everything I’ve been striving for with my language study,” said Matrisciano, who has also studied French, Italian and Latin. “This competition proved to me that not only will my languages take me places, but once there, I will hold my own and succeed.”