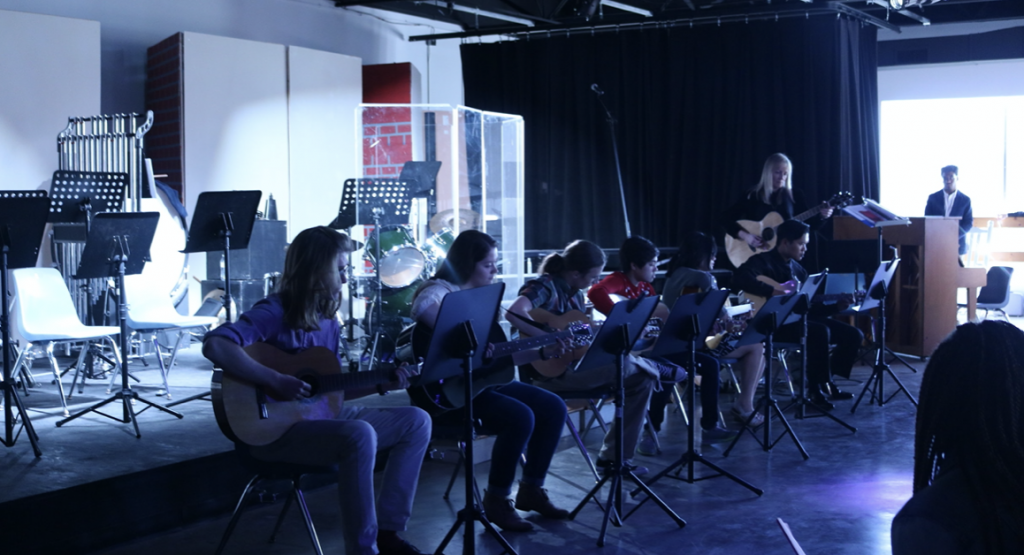 Mississippi School for Mathematics and Science celebrates the holiday season with countless celebrations. An annual favorite is the Winter Concert hosted by The MSMS Music Department. This festive event, showcasing the MSMS Blue Notes, was hosted on Sunday, December 10.

As family and friends of the community filed into Shackleford Auditorium, the effects of the new venue this year were palpable. Usually held in Pac Music Room, the group took advantage of the renovations to Shack Auditorium in order to highlight the talents of the musicians. Shack Auditorium was recently transformed into a black box theater, featuring improved lighting, intentional stage design, and innovative lighting system.

Kelly Brown, Director for Academic Affairs, is an active supporter of all student groups, but has a special place in her heart for the MSMS Blue Notes group. Brown participates in the performances of the group each year, providing accompaniment on the piano. She comments on the impact of the new venue on the concert.

“The exciting thing for me about this particular concert was that we were in a new venue with out newly-renovated Shack Auditorium, which was fabulous. It is always fun to play for the Blue Notes, so this is my ninth year playing for them. I always think that this is a way for the community to see us in a different light because this shows our humanities and our talent as well as how intelligent we are. Sometimes the emphasis gets put on the academically gifted, and the academically talented side doesn’t get much notice, but through this and several things like Creative Writing and what Mrs. Jones does with art, that side can come out as well,” Brown expressed.

While the Blue Notes sang Christmas carols of all genres, the guitar studies students, piano students, and beginning band students also had an opportunity to showcase their talent. Solos sung included “Is You Is or Is You Ain’t My Baby” and “Colder Weather” as the instrumental groups presented “El Ruquet Valent” and “We Wish You a Merry Christmas.”

Not only does the Blue Notes group conduct a Winter Concert annually, they also travel throughout the state during their Sights and Sounds trip, when the students prove their dedication through well-executed musical pieces to residents of Mississippi.

Senior Amber Jackson received the honor of singing “What a Wonderful World” as a solo in the concert this year. Jackson describes her experiences attending shows with the group.

“We have the Sights and Sounds tour that we do every year for the fall semester. To practice for that, we usually have outside practices and some in-class. We work really hard, students brought some suggestions on what they want to sing. We had two or three weeks after we came back from break for the holiday performance, so we really didn’t have that much time, but we got it done and we sounded really good. We used some material from the Sights and Sounds performance because a lot of people didn’t see that performance. It gets people in the holiday spirit, it provides a holiday feel as you get to see your fellow students. You get to relieve stress and listen to some pretty cool tunes from your peers,” Jackson stated.

The Music and Performing Arts Department, led by Dawn Barham, continues to produce annual shows for the public to witness the musical and artistic talent at MSMS. Their next concert can be expected to occur during the spring season.