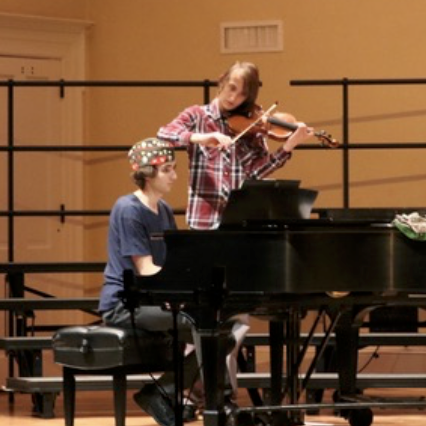 Mississippi School for Mathematics and Science is unique in the fact that five foreign language classes are offered for study: Latin, German, French, Spanish and Russian. These classes celebrated the holiday customs of their respective cultures by showcasing a student-led World Language Holiday Concert on December 6.

Margaret Henry, Russian and Spanish instructor, explains the history of the concert.

“I think we have been doing the concert since 2010. We did the first performance as part of a holiday concert with Ms. Dawn Barham and the choir. When I first started, I wasn’t teaching Russian so in the beginning we had Latin, French, Spanish and German. Then it expanded to Russian when I started teaching it in 2012, then this year it expanded to include Finnish, making it six languages,” Henry revealed.

The concert marked the first public performance of the new-found Finnish Club. Senior Leah Pettit, one of the founders of the club, describes how the club was established and its preparation methods for the concert.

“You know that thing your friend mentioned jokingly, and you said yes, we should do that?  Yeah, me too. Only sometimes I’m serious.  And that’s how Finnish Club came to be.  William said something about Finnish being the only Nordic language that wasn’t like any of the others, and it just kind of escalated from there.  The name came up because William and I had just been talking to Dr. Benge about the Linear Algebra Class, and we were asking Gary if he wanted to take it. Then we asked if he wanted to learn Finnish and he said sure.  When Hamilton had a similar response, I jokingly said that we should form a Linear Algebra Study Group for the Linear Algebra Class, but use that time to learn Finnish.”

With only eight members, the team had to ensure that their presence was noticed and memorable in the concert through diligent practice.

“Preparing for this concert was a little tricky.  Most languages have three hours a week to work on their activities. We have 1. Most students have some understanding of the grammar, vocabulary and pronunciation of their language. We didn’t. Most languages have a teacher who knows the language. We have a couple of kids with internet and free time. Top that off with the first word of our first song having three different ‘u’ sounds, and the odds are completely stacked against us.  However, we also had dedication where others had apathy, so we practiced.  When we realized we were too quiet, we spread out. We stood across the road from one another outside of Hooper and down the sidewalk and sang until we could be heard. I am still amazed that eight students who had barely any knowledge of a language had agreed to sing in it in front of an audience. Even though we had problems with Silent Night and we didn’t quite know all the words to ‘Joulukirkkoon,’ they kept calm and stuck it out. They didn’t back out in practices when we realized how few of us there were or how little the song repeated itself, and they didn’t back down at the concert either,” Pettit added.

The audience was taken aback by the Finnish Club’s public declaration of independence from the Russian Club.

“When we introduced ourselves with the on-this-day-in-history deal, I think some people started to get very confused.  I don’t know if they were expecting us to sing the Finnish National Anthem (no way, that was written in Swedish!) or what, but I don’t think anyone was expecting us to declare our independence from Russian Club, so when we did, they all looked at each other like, ‘No way, is this real?’ Then Olga declared us an independent club, and we experienced true freedom for the first time,” Pettit explained the scene.

The other world languages also displayed determined effort and enthusiasm into their performances. Traditional songs such as “Oh Tannenbaum” by German, “Feliz Navidad” by Spanish, and  “Adeste Fidelis” by Latin cheering in togas were sung while the Russian students performed in kokoshnik and sarafan attire bought by Henry from Russia. All six languages also harmonized together as they sang “Silent Night” in their respective languages.

Senior Jackson Sparkman sang as a part of Spanish II Class. Sparkman describes the importance of the language concert.

“I sang Feliz Navidad. I think the concert is important because Mississippi is emerging as a world leader. It’s already the most diverse state in the union, so I believe that the more that we celebrate the different cultures that make Mississippi, the more that we’re emerging as a leader in the nation. I sang the song last year, which was a whole lot of fun. I think it’s important that we’re celebrating different cultures because so often we focus on culture wars, where we focus on the differences between us and I believe that by having a song like Feliz Navidad, which is something so apparent in American culture, I think we’re highlighting this cross culture between Spanish and English in the holiday spirit,” Sparkman said.

Junior Danail Dimitrov committed to compose a piano arrangement of “Carol of the Bells,” which he performed with senior Aidan Dunkelberg on the violin.

“I enjoyed the concert and I was very excited to see my classmates perform, especially since for some, it was their first time on stage. For my piano piece, I thought how it snows a lot in my home country, and I wanted to make a song that reminds me of the snow,” Dimitrov expressed.

The World Language Holiday Concert not only highlights the musical and distinctive language talent at MSMS, it provides feelings of solidarity and joy while students display the beauty of foreign music and cultural customs they have learned throughout the year.