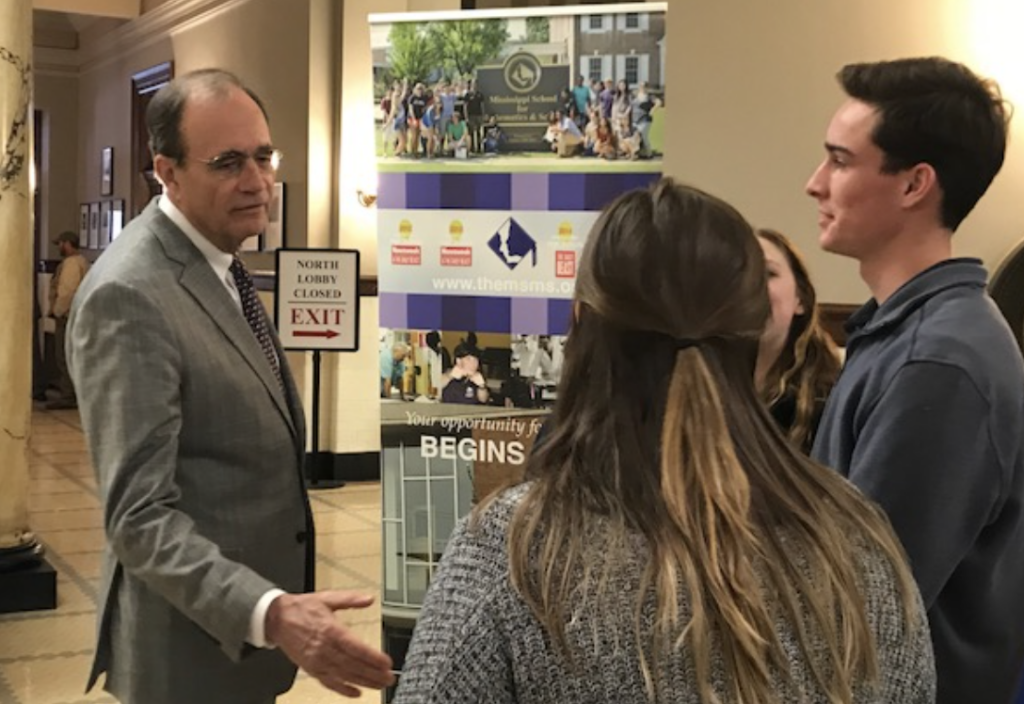 MSMS collaborated with the MSMS Foundation to allow 30 current students the opportunity to travel to Jackson on January 31 in order to meet and talk with state representatives and senators on Capitol Day while the legislature was in session. The event served as a unique chance for the young individuals to represent the school and raise awareness about the significance of MSMS to the state of Mississippi.

Executive Director Dr. Germain McConnell accompanied the students to the Capitol and shared the importance of the event.

“We took students to the Capitol to give our elected officials an opportunity to interact with students who represent the entire state of Mississippi.  As one of the top educational institutions in the U.S., we want our legislators to take pride in their investment of academically gifted students. Our students need to know who their elected officials are from their home towns and communicate to them how much of an impact MSMS has had.  With the reduction of spending by the state of Mississippi, we need to inform our legislators of our successes and needs.  Exposure to those who make the decisions about how public dollars are spent is and will continue to be important for MSMS,” McConnell stated.

Not only did the group of students gain valuable experience practicing their interpersonal skills while interacting with high-ranking elected officials, but they also received important insights into the workings of state government and the appropriations process. About ten students were able to see the House of Representatives deal with non-controversial bills while the rest saw the Senate conduct their meeting.

“MSMS is a investment by the people of Mississippi – through their representatives in the state legislature – in the future of Mississippi.  It is important that our school community visits representatives and senators to update them on the exemplary status of that investment as well as to thank them for their continued support.  Capitol Day, it seems to me, is a small part of that effort.  The day was successful, but that effort will need to carry on as students, parents, alumni and friends of our school continue to reach out to their elected representatives,” expressed MSMS History professor Chuck Yarborough.

The community at MSMS shows efforts in spreading knowledge that the school needs support of state representatives to continue working towards its vision as a home for Mississippi’s academically gifted and talented students that will contribute to the state in the future.

“MSMS has a mission that reaches into every corner of Mississippi. Capitol Day gives us an opportunity to meet with state office holders to remind them of the lives that we touch, and of the ways we would like to make Mississippi a better place. Of course, we need legislative support to bring our mission to fruition. Allowing legislators to see that they have students from their districts helps us–it moves us from the abstract notion that MSMS is a good place to a more real understanding of the need to support us. I don’t know of a single legislator or state official who walked away unimpressed once they got to speak with MSMS students,” said English professor Dr. Thomas Easterling, who chaperoned the trip along with Yarborough.

Serving as an ambassador the school, juniors and seniors were able to see the impact they can make to aid the school in acquiring more support from state powers. Senior Gabby Kennedy was among those who interacted with the legislators, describing the experiences she gained as a student at MSMS and how the school has helped her discover her passions and develop her character.

“Capitol Day was a great experience, we got to talk to our legislators and share our experiences at MSMS. It was wonderful to be able to share how much MSMS means to us with the leaders of the state,” Kennedy said.

The students who attended wish to share their new-found experiences and perspectives of the judicial and lawmaking process to help empower their classmates to work toward the goals of Capitol Day and raise awareness of how MSMS is an impactful contribution to the state of Mississippi.