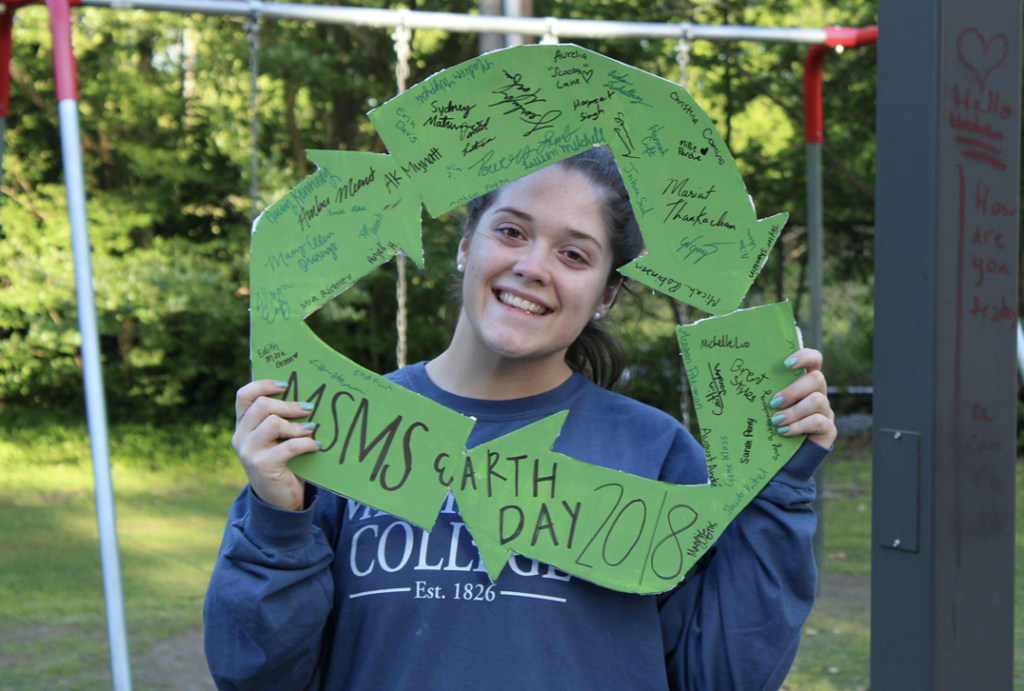 In honor of Earth Day, the MSMS Student Environmental Awareness League (SEAL) organized a celebration event for the student body and faculty on April 19. A memorable time for those in attendance, the after-school gathering served as a manner in which the SEAL team could spread their passion for the importance of nature and raise awareness about threats to the environment’s beauty.

Dr. Bill Odom is the club’s sponsor. He comments on the goal of the green team’s plans.

“We wanted to bring awareness to students of all ages about the condition of the earth and how to keep it healthy,” Odom explained.

In order to engage the student body, the Earth Day celebration featured bubbles, cupcakes, contests, and sidewalk chalk drawings to encourage the recycling and overall well being of the earth. Students were given the opportunity to compete for reusable water bottles and potted plants as rewards for guessing the correct amount of cans in a bucket, promoting Earth Day on social media, or contributing plastics and used paper to the recycling bin.

“I loved having everyone come out for a fun time. Having music and cupcakes created a carefree environment that everyone could enjoy. We ended up filling a whole recycling bin up with recyclable materials the students brought, which is a big accomplishment. In the end, I hope the event promoted the idea of recycling, so more people will do it,” SEAL member Anna Mynatt exclaimed.

The celebration also spotlighted Earthie the Earth Ball, a model of the earth club members created out of used paper and trash bags. In order to structure the giant ball, volunteer crafters spent days crumbling decades-old newspapers and shredded paper into plastic trash bags. These stuffed bags were then taped around a central heavy metal and covered with a blank bedsheet. Students proceeded to spray paint the mass to portray a realistic image of the earth. While the intended purpose of the earth ball was to form a team-building exercise, students preferred trying to lift and push it around.

Odom stated, “I love the earth ball. I’ve been trying to do it for twenty years. I haven’t had the opportunity to play the  game yet with youngsters, but hopefully next year. I’d like to do more with kids.”

As part of Earth Week, SEAL also conducted an electronic waste disposal collection on April 21. Both students and faculty contributed numerous pieces of used electronics, including television screens, computers, batteries, phones, and several other household appliances. SEAL properly disposed of the items through the Right Way to Throw Away program sponsored by the Golden Triangle Solid Waste Management Authority.

“I’ve been trying to do e-waste removal services for about five or six years now. E-waste is a problem in today’s society, especially in the United States to properly dispose of our electronic devices and there are few opportunities to do that. I am trying to use this organization as a way to spread that word and to promote that responsible disposal of these hazardous devices. There are heavy metals, there are plastics, etc. that need to be properly disposed, so this is a good opportunity for us to begin something that might grow into a state level. The Golden Triangle Solid Waste Management Authority has long been a friend of MSMS and has always tried to help and educate MSMS students about recycling and waste management and the technical specifications that disposal has become,” Odom expressed.

The SEAL team has been determined this year to put their efforts into helping others in the community realize the importance of taking care of the environment and learn to appreciate its true beauty. Along with hosting a park clean-up at a local site and collecting electronic waste from surrounding communities to dispose of e-waste properly, the club intends to continue their work projects. Their next move is to purchase a plastic chipper that will allow students to shred plastic, which can be later used for 3-D printing in the MSMS engineering lab.