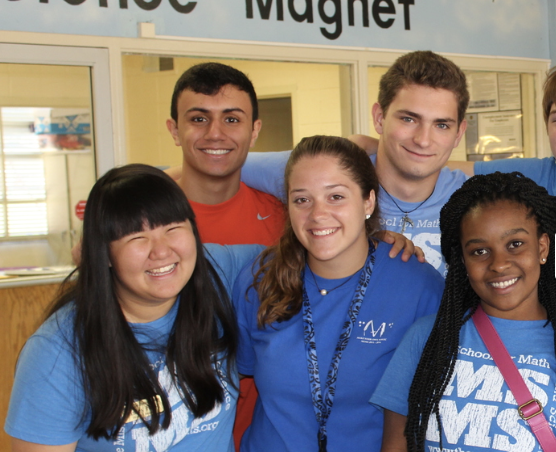 On August 1st and 2nd, 2016, the 118 members of the newly inaugurated Mississippi School for Mathematics and Science spent several hours exploring the ideal of service.

In partnership with United Way, students from MSMS visited every single school in the Columbus Municipal School District to offer their help to the schools’ teachers in getting their classrooms ready for the upcoming school year.

“The four ideals of MSMS are Scholarship, Creativity, Service, and Community and we feel that this [project] not only fits the service aspect, but that it is important for our students to learn to give back to the community,” said MSMS Director for Academic Affairs, Kelly Brown. “If we teach them this now this is something they can take with them.”

The students were led by the MSMS Emissaries, seniors who work as student ambassadors and mentors for the incoming juniors.

Some of the new juniors attended the schools at which they worked, like new junior Mary Owings, who was a student at Columbus High School last year.

“It’s weird to be here not as a student, but I’m so happy I got to come here and do a follow up,” said Owings.

Owings and her friends were able to help out some teachers they knew, like Columbus High School Spanish and ESL teacher, Courtney Stanback.

“When I saw so many come in, I thought we have a lot to do. How is this going to work? But then once they came down we immediately had projects they were willing to do anything and we started to see things happen. I thought it was fabulous,” she said.

Gavin Senger, a junior from Florence, Mississippi believes the school is already teaching his fellow students the school’s values.

The Columbus Municipal School District consists of several schools, including Sale Elementary, where Principal Kimberly Blunt was putting her MSMS volunteers to work.

“The kids have been wonderful. We have felt so blessd to have them in our buildings,” she said. “The students came right in and have been working hard.”

Emissary Tia Wilson, of Greenwood, Mississippi, noted that she hopes the juniors understand that service is a critical component of the MSMS experience, today and beyond.

“Giving back is the ultimate thing to do,” she said. “Later in life we want them to give back to Mississippi in a big way.”