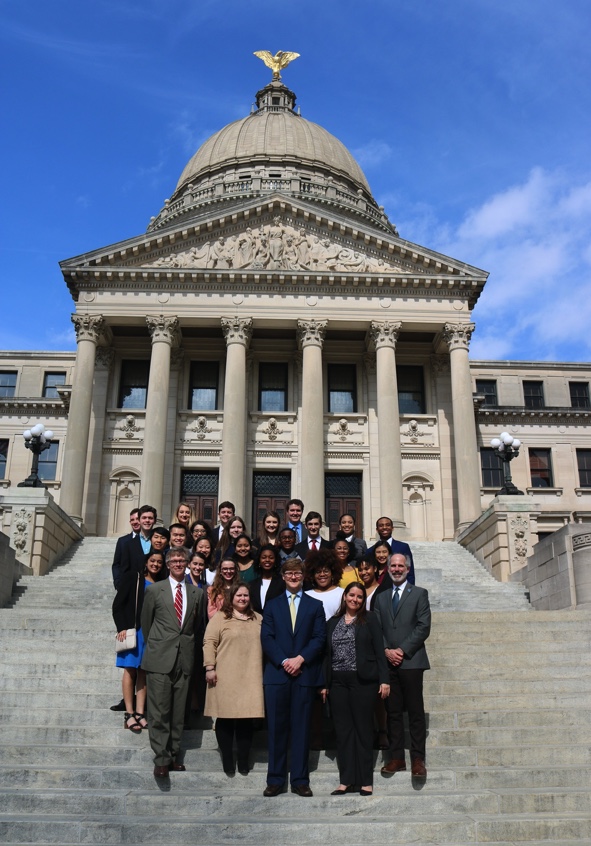 The Mississippi Capitol was host to 24 current MSMS students on Wednesday, February 6. The students were able to meet and converse with state representatives and senators while the legislature was in session on Capitol Day. Students were there to raise awareness about the significance of the school to the state and to represent the school. The day was also a laboratory in many ways for learning about the legislative process as well as government at the state level.

Students and chaperones departed the campus at 6:00 a.m. in order to begin meeting with their legislators at 9:00 a.m. “Students were able to meet with multiple senators and representatives to both thank them for their support of the MSMS Opportunity for Excellence and to make legislators more aware of the work of our school,” said Chuck Yarborough, MSMS History instructor. “Those representatives and senators are essentially the reason MSMS exists,” said Gina Nguyen, MSMS Junior. She added, “Without the state funding, we wouldn’t be where we are today. It’s important that we show our thanks for their continued support and that they know we are successful.”

“We are grateful to our legislators for their continued support of MSMS,” said Dr. Germain McConnell, Executive Director. He added, “We wanted them to have the opportunity to interact with students from their areas and to hear directly from students about the life-changing experience of MSMS.  We selected students to represent various parts of the state, and of course we needed these students to be able to effectively communicate their experiences and what MSMS means to them.” “Meeting my representative was important because I had never met her before. I was able to actually talk to her and ask any questions I had. We were able to see how bills are passed in the Senate and in the House,” said Erin Williams, MSMS Senior.

Some of the legislators and alums joined the students, faculty, and staff for lunch at the Iron Horse Grill. Dr. McConnell expressed, “We were also happy to have five of our alumni present to share their experiences.”

“Overall it was awesome to experience an environment with all of the state Senators and Representatives. It also opened my eyes to how many senators and representatives don’t know what MSMS is even though we are the #1 high school in the state. I thought we did well getting our school on their radars and representing MSMS well,” said Erin Davis, MSMS Senior.

The MSMS family is appreciative of the support of our local area legislators. Dr. McConnell added, “In particular, Representatives Kabir Karriem and Cheikh Taylor and Senators Chuck Younger and Angela Turner-Ford.  Representative Steve Massengill, who is a parent of an alum, was also very helpful and has shown great support for MSMS.”