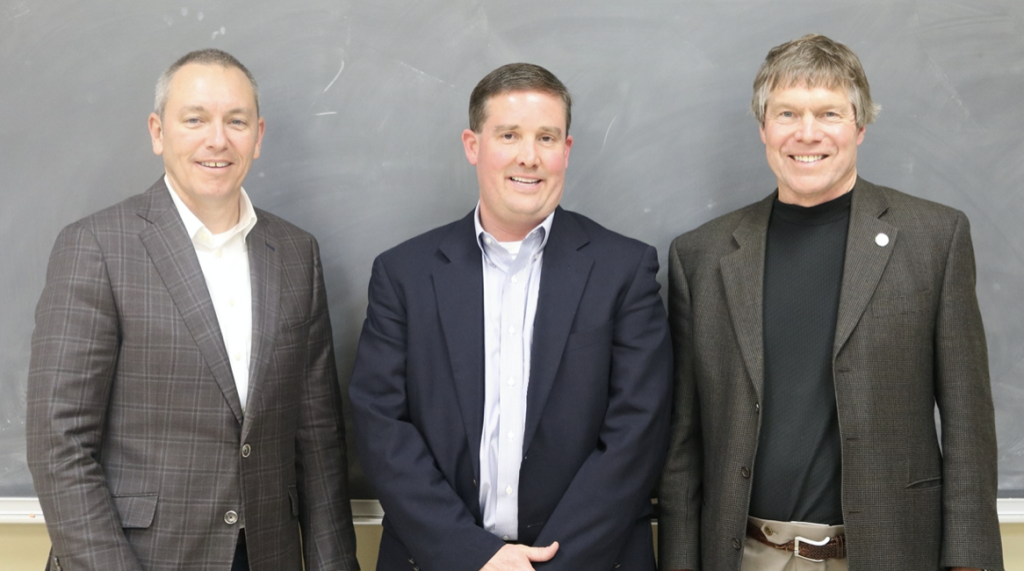 On March 6, the entire student body from the Mississippi School for Mathematics Science (MSMS) gathered in Nissan Auditorium on the campus of the Mississippi University for Women to participate in the first annual Business Plan Competition in collaboration with Regions Bank. Five teams of MSMS students faced off against one another in an attempt to win bragging rights and significant prize money.

In August of 2017, Dr. Kayla Hester launched the Business Plan Competition, providing the student body with an overview of the competition rules and guidelines, concluding with a call for business plan proposals due in mid-October. Dr. Hester convened a panel of three judges, who represented business development experts across the state of Mississippi—Mr. Billy Mounger, Chief Executive Officer for TriStar, Mr. Sean Wessel, Chief Financial Officer for Quality Steel, and Mr. Brian Haynes, President of Jones Logistics. The panel of judges narrowed the submitted business plans down to the top five teams. Those top five teams advanced to the final round of the competition which included one on one business development meetings with each of the judges to further hone their proposals and a final presentation for the panel of judges and the entire MSMS school community.

On March 6, all five teams had fifteen minutes each to deliver a compelling presentation of their business plan proposal to the panel of judges, the MSMS school community, and local family and friends. Each presentation also included a question and answer session with the judges to probe deeper on the plans’ feasibility and scalability.

The first team to present was comprised of senior, Gary Nguyen and juniors, Hamilton Wan and Helen Peng. Their business concept was called, “Meterwise” and consisted of a plan to create and supply better utility meters to track energy usage and enable customers to make more environmental and budget-friendly energy choices.

“The competition was largely a learning experience for me, and I am grateful for having had the opportunity to work alongside my teammates to develop an idea that we felt strongly about,” Nguyen described. “Along the way, I’ve come to realize the amount of commitment that entrepreneurship requires.”

was inspired by Andrus’ own personal experience. She stated, “The concept for Musical Motivations came from my own experiences in my spinal rehab after being diagnosed with a wedge compression fracture in my T-spine.”

The third team consisted of seniors, Griffin Stewart, Sydney Matriascano and Mariana Strawn, under the business name, Oodles of Noodles. Their concept was to produce caffeine-enhanced noodles that are easily prepared and nutritionally satisfying. They concluded their presentation with a variety of noodle-inspired puns designed to get the audience laughing and make a lasting impression.

The fourth team of the evening was Daniel Smothers and Justin Cucuzza, who shared their concept for customized straight-line and bolt-action pens. Smothers’ Pens specialized in pens with a story, crafting each writing utensil from a unique wood that spoke to its ultimate purpose. Smothers and Cucuzza produced beautifully hand-crafted pens for each of the judges made from wood related to their field of expertise. For example, Mr. Haynes, who works in supply-chain logistics, received a pen refined from the wood of an old pallet.

The final presentation for the evening was All or Muffin, led by Brianna Ladnier and Jackson Sparkman. Their business concept was to launch a health-oriented bakery that focused on delivering nutritious and delicious baked goods to those with specific dietary needs.  “I was inspired by the general lack of options for those with dietary restrictions. I was vegetarian for four years, so I knew how hard it was to find options,” Ladnier explained.

Once all five teams had completed their presentations, the panel of judges were dismissed to deliberate. During the interlude, there were several performances from MSMS student vocalists and musicians. The judges then re-emerged to announce the winners.

All or Muffin took home third place and were awarded $750 each. Smothers’ Pens received second place honors and $1,500 per team member. Oodles of Noodles obtained first place and $3,000 in prize money for each participant. All scholarship prize money was generously funded by Regions Bank to encourage entrepreneurship and business acumen.  “Speaking on behalf of the Oodles of Noodles team, we were so humbled to win. And over the moon excited! It was absolutely breathtaking to see our hard work pay off, and we highly encourage everyone to participate next year,” Sydney Matriascano stated.

The evening concluded with brief remarks from Arthur DuCote, State President for Mississippi at Regions Financial Corporation on the importance of business development, relationship building, and entrepreneurship to students’ future success. Students were motivated by DuCote’s words and were inspired by the presentations they saw their peers deliver. Sidney Mason, current junior, said, “I cannot wait to participate next year, seeing everyone on stage with their ideas and dream really inspired me to believe I can actually do it. It won’t be easy, I know but there’s nothing wrong with giving your all and trying especially when it’s a possibility of getting a scholarship!”